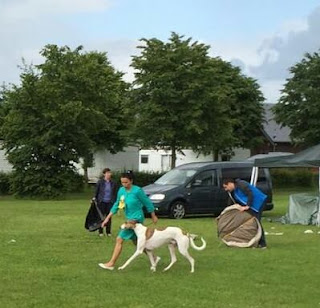 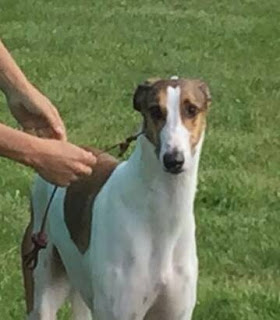 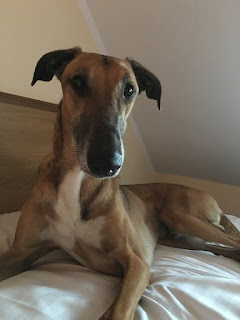 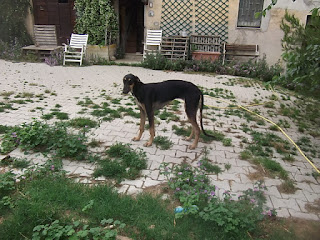 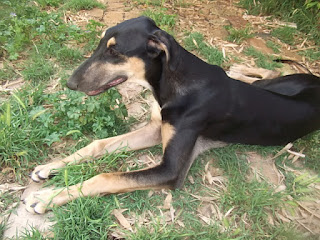 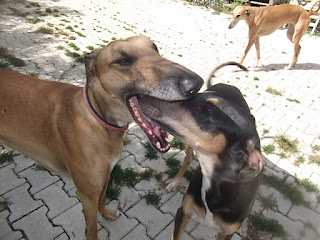 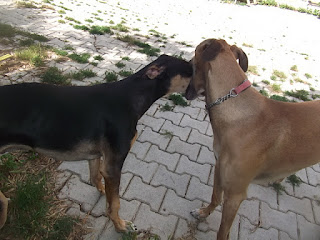 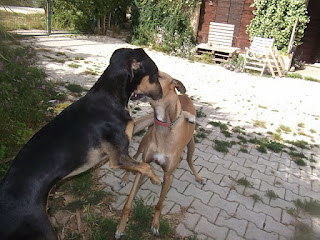 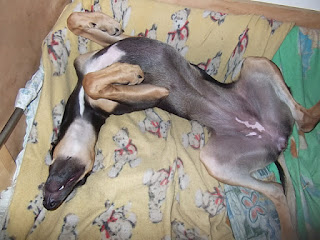 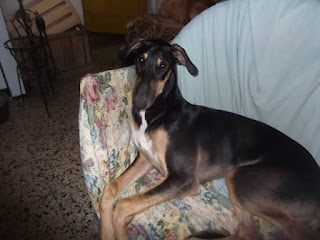 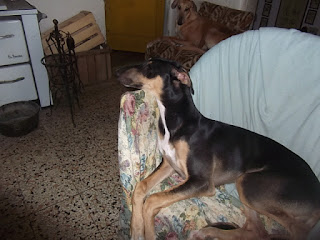 Greyhounds have a higher tendency to develop delayed bleeding associated with minor procedures or trauma. The bleeding often occurs around 36 to 48 hours after the procedure or trauma incident. In affected greyhounds the common haemostasis assays are often normal, suggesting the bleeding is not related to primary or secondary haemostatic abnormality. It is generally believed the bleeding is related to enhanced fibrinolysis or weaker clot strength. As a result, pre-emptive treatment with antifibrinolytic medication is recommended to reduce the frequency and severity of this bleeding, which often manifests as extensive skin bruising extending from the surgical or traumatic site. Tranexamic acid is a medication of choice in the UK due to its availability and antifibrinolytic effect, as well as its minimal adverse reaction profile.
“Greyhound bleeder” is a term referred to the tendency of greyhounds to bleed after minor trauma or simple surgical procedures.
Around 26% to 30% of the breed will develop delayed postoperative bleeding after ovariohysterectomy, orchiectomy and limb amputation1-3.
These procedures are commonly performed in this breed as more retired racing greyhounds are being adopted as pets. In addition, osteosarcoma is one of the most common neoplasia affecting limbs in greyhounds, and limb amputation is the recommended treatment of choice4. This can have significant implications on case management as it may create emotional burden to the clients, increase patient morbidity and increase treatment cost.

In greyhounds, bleeding after minor trauma or surgical procedures commonly has a delayed onset. It often develops around 36 to 48 hours after the inciting incident or surgical procedure. Postoperative non-steroidal medication administration is unlikely to contribute to the delay3.
Delayed bleeding often manifests as cutaneous bruising extending from the surgical wound to surrounding areas (Figures 1 and 2), which can persist for days. Distant or mucosal (for example, mucous membrane, conjunctiva, prepuce and vulva) bleeding is not observed.
In some cases, cutaneous bruising can happen in combination with haemorrhagic discharge from the surgical wounds, as well as delayed sloughing of the skin and subcutaneous tissue (Figures 3 and 4). Wounds with discharge and/or skin defect should be covered with appropriate bandage aseptically.

Perioperative bleeding can be attributed to the mechanical trauma from surgery and/or systemic abnormalities such as abnormal haemostasis5. It is important to apply Halsted’s principles, especially by exercising gentle tissue handling and meticulous haemostasis intraoperatively to minimise the risk of intraoperative and postoperative bleeding.
However, in some cases, postoperative bleeding may still occur despite these efforts, which is likely to be secondary to systemic abnormalities, such as abnormal haemostasis.
Abnormal haemostasis can include primary haemostasis abnormality (for example, thrombocytopenia, platelet dysfunction or von Willebrand disease) or secondary haemostatic defect (for example, clotting factor deficiency – such as haemophilia A or B, factor VII deficiency – hypofibrinogenaemia or hypoprothrombinaemia)5.
However, in some cases, especially those with delayed postoperative bleeding, the bleeding can be due to abnormal fibrin stabilisation, enhanced fibrinolysis or factor XI deficiency6. In addition to these, endothelial damage or dysfunction, such as those in sepsis, can also result in generalised bleeding postoperatively1.
Generally, greyhounds have a higher PCV, red blood cell count and haemoglobin concentration7. On the other hand, the white blood cell, neutrophil and platelet counts are lower and the mean lifespan of the red blood cells are shorter than that of other breeds7. Despite this, the lower platelet count is not the cause of the tendency to bleed in this breed7.
In greyhounds with delayed postoperative bleeding, the haemostasis assays (Table 1) are often normal preoperatively1. In those dogs that develop delayed postoperative bleeding, the antiplasmin and antithrombin activities are significantly lower, but still within normal ranges preoperatively1. This, in combination with the normal haemostasis assays, suggest the postoperative bleeding is not due to primary or secondary haemostatic abnormality; rather, it may be due to abnormality in clot maintenance (enhanced fibrinolysis)1.
Thromboelastography (TEG) is a whole blood coagulation analyser. It evaluates cell/protein interaction and provides global analysis of the haemostatic system, including primary and secondary haemostasis, as well as the fibrinolytic system8. In a study examining haemostasis in greyhounds and other dog breeds using TEG, it was found the clot strength in greyhounds was weaker8. This can explain the increased tendency to bleed, which has been observed in greyhounds after minor trauma or surgical procedures8.

Diagnosis of delayed postoperative bleeding is often based on the signalment of the patient, recent history of trauma or surgery and the clinical signs. The platelet count, prothrombin time and activated partial thromboplastin time are often normal in affected dogs. Some patients may have an elevated fibrinogen level. If TEG is available, slower clotting kinetics and reduced clot strength may be detected8. TEG is routinely performed at 30 minutes post-blood sampling and the results should be compared to the normal values established at the same institution.

As delayed bleeding appears to be related to the maintenance of the fibrin clot and the enhanced fibrinolysis, pre-emptive administration of antifibrinolytic medications during the immediate postoperative period is recommended2,3.

Tranexamic acid (TXA) is an antifibrinolytic medication available in the UK. However, the administration of TXA in companion animals is not authorised by NOAH and veterinarians are advised to exercise precaution for its use and educate clients on the advantages and disadvantages of this medication.
TXA is a lysine analogue and blocks the lysine binding site of plasminogen, thereby preventing the activation of plasminogen, which is the precursor of plasmin9. As plasmin degrades fibrin clots into fibrin degradation products, this antiplasmin effect decreases fibrinolysis and increases clot strength10. In a retrospective study, TXA administration in dogs with bleeding disorders significantly reduced the number of blood product units transfused9.
TXA is 10 times more potent than epsilon-aminocaproic acid (EACA) and is associated with minimal adverse effects9. However, when given at high doses intravenously (>10mg/kg), it is associated with vomiting immediately after administration9. In human medicine, the most frequent adverse effects following oral administrations are nausea and diarrhoea, which were noted in around 12% of patients10,11. The reported safe dose range to use in dogs – based on extrapolation from human medicine and a retrospective study – is 7mg/kg to 10mg/kg, IV tid to qid9. TXA also comes in capsule forms; the authors use 5mg/kg to 10mg/kg PO tid for five to seven days postoperatively.

EACA is another antifibrinolytic medication, causing reversible blocking of lysine binding sites on plasminogen, thereby inhibiting fibrinolysis9. Similar to TXA, it also promotes antiplasmin activity and significantly increases clot strength3,9.
This medication is widely available in the US, but not in the UK. The pre-emptive postoperative administration of EACA is associated with reduced frequency of bleeding in greyhounds undergoing limb amputation2. Greyhounds that did not receive EACA were 5.7 times more likely to develop postoperative bleeding than those that did receive the medication2.
The first dose is administered intravenously at 15mg/kg to 40mg/kg immediately after surgery, followed by oral administration of 15mg/kg tid for five days2,3.
There have been concerns antifibrinolytic medications may increase the risk of thromboembolic complications. Fortunately, these risks were not observed in human clinical trials10,12.

Some patients experiencing severe postoperative bleeding will require transfusion of blood products, such as packed red blood cells and fresh, frozen plasma. Packed red blood cells contain only red blood cells and there is no clotting factor or platelet included. In contrast, fresh, frozen plasma contains clotting factors, von Willebrand factor and proteins such as albumin and globulins, but does not contain any red blood cells or platelets.
Blood products should be administered through a filter over at least one to two hours. Patients should be monitored for transfusion reaction (for example, pyrexia, restlessness, vomiting, diarrhoea, urticaria, hypotension, collapse and dyspnoea) and fluid volume overloading. Readers are advised to refer to transfusion medicine literature for further information on the administration of blood products.

Delayed postoperative bleeding, and bleeding resulting from minor trauma, are common in greyhounds. The aetiology of this is likely to be related to enhanced fibrinolysis, as well as weaker clot strength. Pre-emptive administration of antifibrinolytic medications (TXA in the UK) can reduce patient morbidity, length of hospitalisation and cost of treatment.
However, it is important to educate clients that, even though these medications significantly reduce the frequency and severity of bleeding, delayed bleeding may still occur in some patients. In addition, it is prudent to advise clients these medications are not licensed for use in companion animals, but have been shown to be beneficial in greyhounds undergoing surgical procedures.
Pubblicato da Highwind a 15:27